Nothing can happen to us 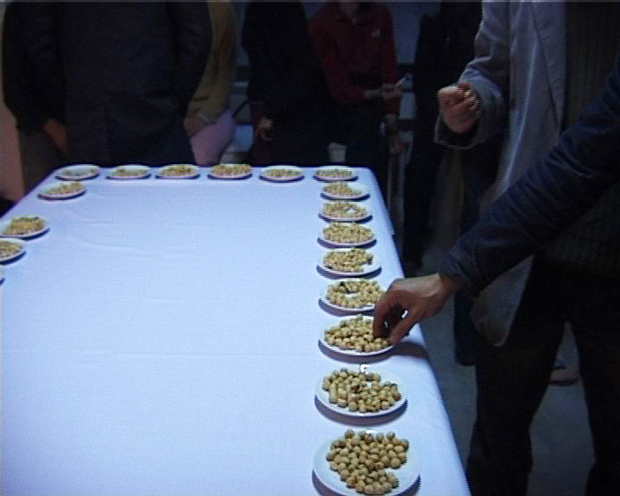 
This project, where the process is regarded as a fundamental element, focuses through the Chernobyl Disaster on the ignorance we are confronted daily in society and the components that constitute the core of this attitude - lack of knowledge, lack of curiosity and more gravely, conscious ignorance.

The project entails performance, installations, texts published after the disaster containing the official censorship and propaganda measures, a collection of works produced by international artists and non-artists and a wall painting expanding out into the space.

During the performance that will take place on April 7th the visitors will be served hazelnuts and tea in plates placed on a diligently set table. A design composed of radiation hazard signs and printed on the plates, which will be left on the table after the performance to become a part of the presentation in the space, conveys the irony of this pleasing treat. The performance aims to fill the space with an artificial feeling of suspense using the “idea of present radiation hazard”. It attempts to communicate to the visitor a feeling of safety induced by the organized comfort of a banquet table and an anxiety about “how safe we are” that appears when confronted with the radiation hazard signs on empty plates after the treat of hazelnuts and tea.

The texts spread out in the space document the policies followed by the Turkish government in the aftermath of the Chernobyl disaster: distortion of reality, censorship, conscious misinforming and excerpts from the speeches made by responsible ministers of the time.

While the texts present the viewer with mind-blowing facts about what took place in Turkey in the aftermath of the Chernobyl Disaster on 26 April 1986; the eating, drinking and chatting atmosphere is intended to create a self-awareness in the visitors, trapped in ignorance and irresponsiveness, about how much they care about the information they receive and how they react to it.

A drawing of the Chernobyl nuclear power plant expanding from a wall in the space onto the floor ends with a drawing on the central column depicting large-scale machines used for cancer treatment in hospitals. The drawing which revolves around the insignificance of human health within the system and the possible horrific consequences of the utmost good faith in technological development, also points at dangers created by humans themselves.

The research conducted in the surroundings of Alti Aylik, and especially in places that serve tea aspires to carry the project outside and to communicate with different people. These voice recordings documenting questions and answers about the governmental measures taken in the aftermath of the Chernobyl disaster and individuals’ reactions are returned to Alti Aylik as sound installations.

A collection of documents about the explosion at the Chernobyl nuclear power plant and the after effects as well as a documentary shot on guided tours of Chernobyl – which are now organized as if it were a tourist site - showing images of the town abandoned due to radiation can be viewed in the same section. In addition, information about groups and associations working on the issue, web site addresses and printed material will be available in this section.

Despite their oddly cool feel, the images taken from the computer game ‘Chernobyl’ use the game format to reduce the poignant reality of the disaster and the after tragedy to the virtual world, and function as part of the “normalization” process at work in the tourist trips organized at the Chernobyl nuclear power plant.

While the free distribution in schools of hazelnuts that could not be exported because of contamination, and the acceptance of these ‘presents’ without ever questioning their origins or content, with a feeling of unconditional submission to the established order had irreparable long-term consequences; this indifferent attitude continues to produce effects on different levels in a society with a short-term memory. The situation where the individual remains inactive even if he/she is personally harmed by the crime and the criminal goes unpunished repeats itself over and over again.

Nothing Can Happen To Us, aims to initiate a discussion on this attitude and its consequences through various encounters and to establish a starting point for the continuation of this questioning process with a newspaper that will be published after the exhibition. A discussion about artistic practices striving to increase awareness and their efficiency will also be included among the activities.