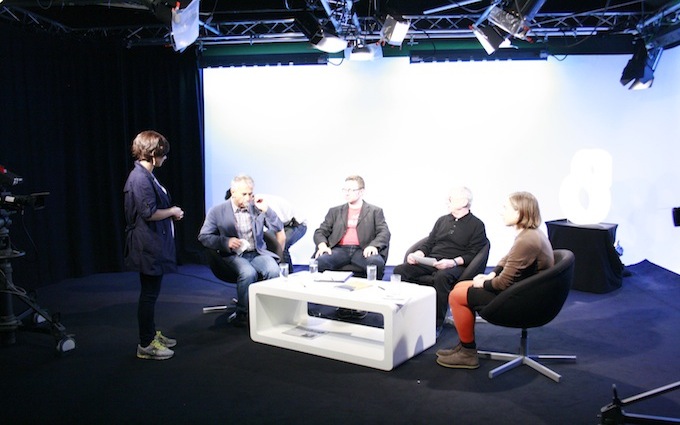 
Elmas Deniz’s video work; Universal Minimum Wage Commission is a TV discussion program with the participation of four people who explore issues revolving around minimum wage. The program aims to articulate a universal minimum wage standard by referencing the commission, which determines the amount of the minimum wage.

The program initiated by the artist includes debaters from different backgrounds; historian, unionist curator and economists. The moderator of the program is the delegate of the artist in symbolic manner however as an initiator-agent artist; Elmas Deniz’s contribution is limited by organizing the gathering and making previous meetings with the debaters, the content is completely generated by the participant debaters. As the title implies the program is about universal minimum wage, yet the word “universal” has already lead to a conclusion that seems senseless, logically unacceptable, self-contradictory, way too utopian. Indeed this is a part of the core idea of the work: underlying the need for worldwide ethically responsible subjects regardless of nationality.

With Sebastian Leitner, Stephan Schulmesiter, Monika Vykoukal and Peter Huemer. Realized in OCTO Community TV-GmbH, The program was broadcasted by OKTO TV. Produced for UNREST OF FORM/Imagining the Political Subject Exhibition by Wiener Festwochen, SECESSION, Academy of Fine Arts Vienna in cooperation with MuseumsQuartier Vienna in May 2013.